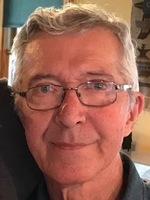 Grant Gordon Harland was born on November 5, 1945, in Winnipeg, MB, and died from cancer on February 14, 2021, in Almonte, ON. Grant attended schools in Winnipeg, in New Jersey when the family moved there in 1955, and in Germany during 1957-58. He was an excellent student in High School, and he enjoyed driving his tiny black Fiat, whose white racing stripes made the car look like a skunk. Because the vehicle had no reverse gear, Grant had to open the driver’s door and push the car with his foot in order to back up. He took an interest in chemistry, and when quite young set up a lab in the basement. Thus, he was able to make chlorine gas and poison himself with it, set the back yard on fire with some explosive concoction he devised, shoot off rockets, and have fun with home-made cherry-bombs. He graduated from Chatham High School in NJ in 1963, and then studied government at Carleton College in Minnesota from 1963-67. He counted his college years as some of the best of his life and frequently returned for class reunions. After graduation, Grant returned to Canada, where he obtained a B.Ed. in 1971 from the University of Toronto. Realizing he had no vocation as a teacher, Grant worked in the U of T library, began a long-term relationship with Kim Lohse, and moved with her to Vancouver, BC in 1974. Both earned their MLS degrees there and returned to Ontario, Grant working as a cataloguer at the National Library of Canada and Kim working in the Library at Almonte. They built their own home on an acreage just outside Clayton, ON. In 1982, they separated. A couple of years later, Grant met Rita West, also employed at the NLC, and they began a happy, loving relationship that lasted until her death in 2013. Both serious readers, they had met over a conversation about the Swedish mystery novelists Maj Sjowall and Per Wahloo. Their first movie date was to see The Return of Martin Guerre. Grant loved his library job, and he lived joyfully with Rita, her son Nicholas, and their many cats and dogs, moving back and forth from Rita’s place in Ottawa to Grant’s in Clayton.

Grant was a gentle man with many gifts. He designed and built his own home. He was a great cook and gardener, a meticulous craftsman, and a kind host and friend. He loved music, especially the blues, Bob Dylan, and 50s and 60s rock. Self-taught, he would play his favourite tunes on the piano. Grant revelled in his home and acreage. He had a penchant for turning everyday information (heating, outside temperatures) into charts and graphs. He transformed his woodpile into a work of art. He delighted in watching the songbirds, deer, and wild turkeys that would come to visit. A weaver, candlemaker, winemaker, and cabinet maker, Grant ensured his home stayed cozy. In later years, Grant became even more of a homebody, but in his early days he had been quite adventurous and was known to appear without warning at his sister’s door in Ontario, having hitchhiked from Minnesota. Possessed of an inquiring mind, he enjoyed reading history and politics especially, but in later years he also became a devotee of the novels of Jane Austen, and huge fan of the Big Bang television series.

Grant’s family wishes to thank Dr. Heather Abramenko for her extraordinary care of Grant and the kind nurses and staff of both Almonte General Hospital and Orchard View Retirement Residence, and the many friends and neighbours who helped Grant during his illness. Anyone wishing to make a donation in his memory might consider the Almonte General Hospital or the Lanark Animal Welfare Society.

Cremation has taken place. A Celebration of Life will occur in the future when COVID-19 restrictions are lifted, and it is safe to gather.

All rights reserved. This obituary is also archived at obittree.com